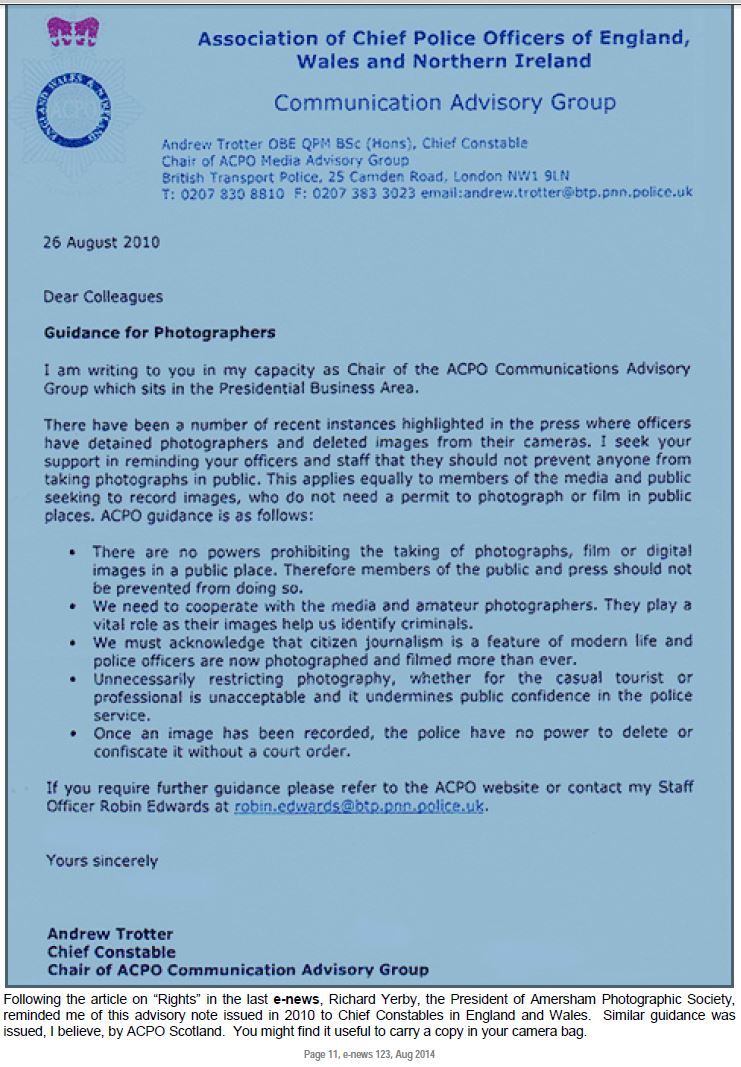 The Association of Chief Police Officers (ACPO) is an independent, professionally led strategic body. In the public interest
and, in equal and active partnership with Government and the Association of Police Authorities, ACPO leads and coordinates
the direction and development of the police service in England, Wales and Northern Ireland. In times of national need ACPO,
on behalf of all chief officers, coordinates the strategic policing response.
ACPO is registered as a private company limited by guarantee in England & Wales – registered address: 10 Victoria Street, SW1H 0NN. Company Number 3344583.
26 August 2010

Dear Colleagues
Guidance for Photographers
I am writing to you in my capacity as Chair of the ACPO Communications Advisory
Group which sits in the Presidential Business Area.
There have been a number of recent instances highlighted in the press where officers
have detained photographers and deleted images from their cameras. I seek your
support in reminding your officers and staff that they should not prevent anyone from
taking photographs in public. This applies equally to members of the media and public
seeking to record images, who do not need a permit to photograph or film in public
places. ACPO guidance is as follows:

• There are no powers prohibiting the taking of photographs, film or digital
images in a public place. Therefore members of the public and press should not
be prevented from doing so.
• We need to cooperate with the media and amateur photographers. They play a
vital role as their images help us identify criminals.
• We must acknowledge that citizen journalism is a feature of modern life and
police officers are now photographed and filmed more than ever.
• Unnecessarily restricting photography, whether for the casual tourist or
professional is unacceptable and it undermines public confidence in the police
service.
• Once an image has been recorded, the police have no power to delete or
confiscate it without a court order.

If you require further guidance please refer to the ACPO website or contact my Staff
Officer Robin Edwards at robin.edwards@btp.pnn.police.uk.